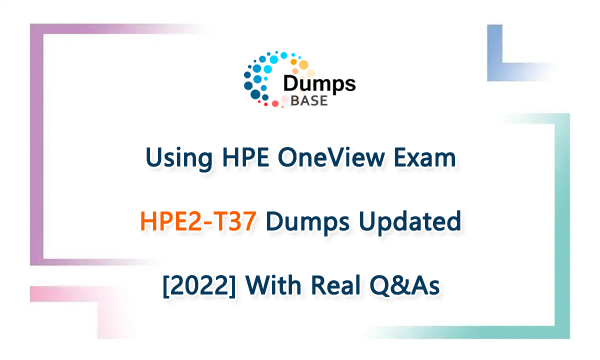 Using HPE OneView HPE2-T37 exam tests your knowledge and skills on designing, deploying, and operating the HPE OneView management suite as the management and provisioning control plane for HPE products and solutions. For a new candidate to be a HPE Product Certified - OneView [2022] certified, the HPE2-T37 is the requirement to validate that you can describe, recommend, demonstrate, and configure HPE OneView converged infrastructure management solutions.

Real HPE2-T37 exam is the web based test, which contains 40 questions with answering in 1 hour. The passing score is 70%. It will validate that you can:

● Manage and report on Hybrid IT infrastructure using HPE OneView   11%

Take the right decision today and start preparation for your HPE Product Certified - OneView [2022] certification with DumpsBase Using HPE OneView HPE2-T37 Dumps Questions [2022]. DumpsBase not only offers you the valid HPE2-T37 exam dumps questions but also endows you  with the professional HPE2-T37 practice dumps preparation assistance that will guarantee your accomplishment in the HPE2-T37 Using HPE  OneView Exam, effortlessly.

A. A logical JBOD cannot be created during server profile creation and must be prepared in advance.

B. A logical JBOD lifecycle can be associated with a server prof le lifecycle and drives can be securely erased.

C. Different types of the drives can be used within a logical JBOD as long as they have the same capacity.

D. Logical JBOD functionality must be enabled on the Enclosure Group level by a storage administrator.

Which license is required to accomplish this task?

Which firmware activation method is only available for a logical interconnect?

You are designing a management solution for five HPE Synergy frames in a primary datacenter and two additional frames at a production site, which is80m away. Your customer is concerned about the cost and complexity of the proposed solution.

What can be done to simplify management and deployment of the remote frames?

A. Frames from the remote datacenter can be added as a remote management ring.

B. HPE OneView backup from the primary datacenter can be restored in the remote datacenter

C. HPE OneView from the primary datacenter can be replicated and used to manage remote frames.

D. Frames from the remote datacenter can be added to an existing Logical Enclosures using FLM links.

Which parameter is defined within the Enclosure Group for HPE Synergy?

A. Networks or network sets included in uplink set.

B. Method of assigning IPs for iL0 and interconnect.

A customer wants to estimate the cost of the licenses required to manage HPE Synergy and some external components.

Which component includes an HPE OneView license for management?

You plan to update HPE OneView to the latest version.

What should you do before starting HPE OneView update?

A. Create a support dump for the appliance and for all managed logical interconnects.

B. Put all servers managed through HPE OneView to maintenance state.

You want to enable HPE Remote Support within HPE OneView.

Which servers will be covered with HPE Remote Support once enabled?

A. Only HPE Synergy Compute Modules with a server profile applied.

C. Any servers under warranty or active service contract

Which statement best describes Ansible integration with HPE One View?

A. It enables health monitoring of third party storage systems that normally are not supported in HPE One View.

B. It enables support for additional servers and HPE Synergy frames if appropriate license is available.

D. It allows the deployment of HPE Synergy infrastructure through a set of Power Shell scripts using REST API.

Which operation can be performed using HPE OneView for VMware vCenter Server?

A. Remove a new node from an existing cluster.

B. Configure VMware cluster properties for HA and DRS.