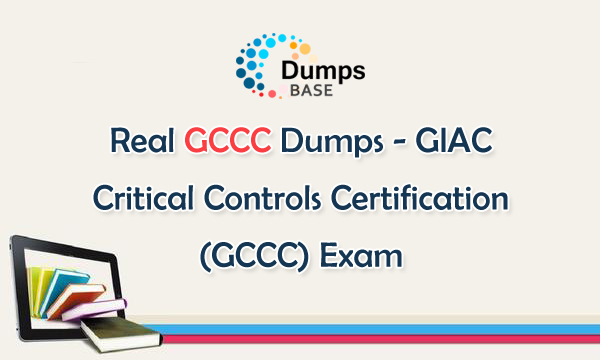 Who is GIAC Critical Controls Certification (GCCC) for?

What are the GIAC GCCC exam areas covered?

● Background, purpose, and implementation of the 20 CIS controls

An organization has implemented a policy to detect and remove malicious software from its network.

Which of the following actions is focused on correcting rather than preventing attack?

A. Configuring a firewall to only allow communication to whitelisted hosts and ports

B. Using Network access control to disable communication by hosts with viruses

C. Disabling autorun features on all workstations on the network

An Internet retailer's database was recently exploited by a foreign criminal organization via a remote attack. The initial exploit resulted in immediate root-level access.

What could have been done to prevent this level of access being given to the intruder upon successful exploitation?

A. Configure the DMZ firewall to block unnecessary service

D. Configure the database to run with lower privileges

As part of an effort to implement a control on E-mail and Web Protections, an organization is monitoring their webserver traffic.

Which event should they receive an alert on?

A. The number of website hits is higher that the daily average

B. The logfiles of the webserver are rotated and archived

C. The website does not respond to a SYN packet for 30 minutes

D. The website issues a RST to a client after the connection is idle

Implementing which of the following will decrease spoofed e-mail messages?

After installing a software package on several workstations, an administrator discovered the software opened network port TCP 23456 on each workstation. The port is part of a software management function that is not needed on corporate workstations.

Which actions would best protect the computers with the software package installed?

A. Document the port number and request approval from a change control group

B. Redirect traffic to and from the software management port to a non-default port

D. Determine which service controls the software management function and opens the port, and disable it

According to attack lifecycle models, what is the attacker’s first step in compromising an organization?

Which of the following items would be used reactively for incident response?

A. A schedule for creating and storing backup

B. A phone tree used to contact necessary personnel

C. A script used to verify patches are installed on systems

A security incident investigation identified the following modified version of a legitimate system file on a compromised client:

The infection vector was determined to be a vulnerable browser plug-in installed by the user.

Which of the organization’s CIS Controls failed?

B. Inventory and Control of Software Assets

What type of Unified Modelling Language (UML) diagram is used to show dependencies between logical groupings in a system?

An organization is implementing a control within the Application Software Security CIS Control.

How can they best protect against injection attacks against their custom web application and database applications?

A. Ensure the web application server logs are going to a central log host

B. Filter input to only allow safe characters and strings

C. Configure the web server to use Unicode characters only